Mogwai performs at the Fillmore in San Francisco on April 22, 2022. Gary Chancer/STAFF.

SAN FRANCISCO – It doesn’t matter if you know the explosion is coming. If it’s big enough, the shock wave can still knock you down.

For the first time in a long history of going to gigs, I was physically knocked down a step or two by a sound wave from a band, Scottish post-rockers Mogwai. It happened during the insane up-and-down dynamic of “Like Herod,” near the end of the band’s nearly two-hour set Friday at the Fillmore.

Then, just as things were calming down and I was getting ready for the song’s second wind a few minutes later, it didn’t matter. I always felt like I had received an unexpected punch in the chest.

As great as the records of the last quarter century are – and Mogwai plays some of the most enchanting and hypnotic instrumental epics ever recorded – they are a different pack of animals when you’re in the same room. Their goal is not for the audience to simply hear the music. They must To feel this too. 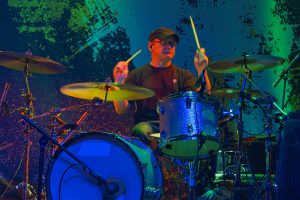 Mogwai performs at the Fillmore in San Francisco on April 22, 2022.

Things started off as expected. Mogwai came out, guitarist and (rare) vocalist Stuart Braithwaite politely greeted the packed house, and they got to work playing “To the Bin My Friend, Tonight We Vacate the Earth”, the opener from the latest album, As the love goes on.

Although it’s a patient song that builds from multiple guitar and keyboard scribbles, as soon as it really kicked in, the low rumbled in my chest. Mogwai, for all his emphasis on building the structure of the song in power, plays extremely strong. Like, louder than Black Sabbath and Motorhead playing loud at the same time.

While this can be an irritant in some cases, especially when the subtleties of songs threaten to be overwhelmed by volume kickback, it never crosses the line. In a way, it’s music you can hear and dissect on a record, but live, you’re going to do both while feeling every note. It’s a rare feeling to be almost inside the music with its creators, and it can get intense. 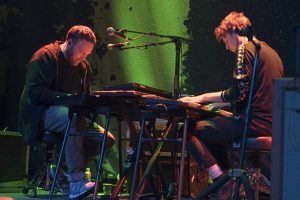 Mogwai performs at the Fillmore in San Francisco on April 22, 2022.

They seemed to have eliminated a lot of keyboard-heavy songs like “Dry Fantasy” early on, which required patience (Mogwai is all about being patient enough to build their music, in the songs themselves, how they sequence the albums, and, well, course, their shows). “I Am Jim Morrison, I’m Dead” was the epitome of classic Mogwai’s approach, but the live set-up was absolutely superb. It was probably the best song in this section of the series, breathing and taking its time to create a vibe that will later hit you in the brain.

It also set up the three-guitar attack for the show’s final third, during songs like “Ceiling Granny”, “Drive the Nail”, and the aforementioned “Like Herod”, when Mogwai hit listeners with sonic rollercoaster that has reached wickedness. from old Radiohead or Sonic Youth: a wall of focused but frenetic guitar waves in eighths and sixteenths as the drums, ever faithful, continued to hammer through the half-times, purposefully fueling the whole noise/melody balance . It made you wince sometimes…in a good way.

The first encore was, predictably, the great “Ritchie Sacramento”, the only song vocalized on As the love goes on. Braithwaite’s voice was good, maybe a bit buried, but enough to (still) make you wonder why they don’t write more. I mean they ended with “Mogwai Fear Satan”, but by then the senses were threatening to overload and the noise was redlining. They brought it back to end the show on peaceful notes, reinforcing that Mogwai live is the rare case where it feels like you haven’t listened to a concert as much as having had a thrilling experience, that which can be accurately said for very few bands.

Folk singer-songwriter Nina Nastasia opened the concert with a set of largely older material, such as “What’s Out There”, from the 2010 album Outlaster. Nastasia recently announced a new upcoming record, Horse without a rider; his first in 12 years, which will be released this summer.